To share your memory on the wall of Elizabeth Brown, sign in using one of the following options:

Print
Elizabeth Anne Brown, 75, of Hamilton, entered into God’s care Thursday, December 19, 2019 at home in Hamilton, with her loving family by her side.

Born in Philadelphia Pennsylvania, to Harry Walter and Mary Elizabeth (Jones) Adair and... Read More
Elizabeth Anne Brown, 75, of Hamilton, entered into God’s care Thursday, December 19, 2019 at home in Hamilton, with her loving family by her side.

Elizabeth was married to Ronald Norman Brown Sr., whom she divorced and remained friends. She later married Lawrence Lerario, who passed away in 2013.

Elizabeth attended Rebecca Gratz Boarding School in Philadelphia and then Angora where she completed up to the 11th grade. After leaving school, she worked as a waitress prior to her employment as a Pharmacy Technician with Michaels’ College Pharmacy in Swathmore, PA for over 20 years and more recently for Apria Pharmacy in Folcroft, PA prior to her retirement.

She enjoyed dancing, going to parties, family vacations in Wildwood, crabbing/fishing, watching her crime shows on TV to include, CSI Miami, NCIS and Law and Order, SVU. She also enjoyed drinking a Miller Lite and smoking her cigarettes while being a Neighborhood Watch. She was always the life of the party. Her favorite memory was her and her sister Marlene sneaking out as teens and going to meet up with boys and then coming home without being noticed.

Cremation will be private.

In lieu of flowers, memorial contributions may be made to ASPCA online at www.aspca.org
Read Less

We encourage you to share your most beloved memories of Elizabeth here, so that the family and other loved ones can always see it. You can upload cherished photographs, or share your favorite stories, and can even comment on those shared by others.

Posted Dec 23, 2019 at 07:33pm
I loved Pat so much. I have so many wonderful memories of working with her and Angela at Michael’s College Pharmacy...her famous. chili and potato salad. Deli pickles and cooper sharp. She was a great lady. So much fun! Oh and Christmas parties at Jack’s home. I smile when i think about how great it was to work with her and the all the memories. She will be missed. Sending love to each of you. May she Rest in Peace🙏🏼
Comment Share
Share via: 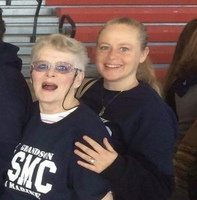