To share your memory on the wall of Dominic Gervasio, sign in using one of the following options:

Provide comfort for the family of Dominic Gervasio with a meaningful gesture of sympathy.

Dominic was a former president for the Neopolitan Society and chairman of the Feast of Lights in Chambersburg for many years. He was a billiards champ who also enjoyed playing poker with the many friends he made at Four Seasons Retirement Community. Dominic was a good storyteller who loved nothing more than being with his large loving family. He was a devoted husband, father, grandfather, great-grandfather, brother, uncle, cousin and friend to many.

Catholic funeral services will be held privately for immediate family only with Msgr. Thomas Gervasio officiating followed by private burial at Our Lady of Lourdes Cemetery, Hamilton, NJ. Funeral arrangements are under the direction of the Hamilton Brenna-Cellini Funeral Home, 2365 Whitehorse-Mercerville Rd., Hamilton, NJ 08619. Due to the pandemic, a memorial service will be held at a later date. Please visit Dominic’s tribute page at www.brennacellinifuneralhomes.com
Read Less

We encourage you to share your most beloved memories of Dominic here, so that the family and other loved ones can always see it. You can upload cherished photographs, or share your favorite stories, and can even comment on those shared by others.

Posted May 25, 2020 at 07:27pm
I was privileged to work with Dominick at the Motor Vehicle Commission many years ago and he was the kindest, nicest person at the Commission. Always nice things to say about everybody. It was a pleasure to count Dominick as a friend.

Posted May 24, 2020 at 07:30pm
Our Deepest Sympathy to the whole family.
Our thoughts are with you during this difficult time.
Love Lind & Steve Psyllos
Comment Share
Share via:
SH

Posted May 24, 2020 at 05:04pm
I worked with Dominic "Dom" as we affectionately called him at NJDMV {70's~80's} and I remember him as a a very well dressed and Stylish Man......and he always had a few jokes he would tell us....he will be sorely missed....Rest Beloved, for Heaven has truly gained another Angel!!! Praying for the Family....
Comment Share
Share via:
DM

Posted May 23, 2020 at 12:00pm
We are sadden to hear of Dominic's passing. He was truly a fine gentlemen with never a harsh word towards anyone. He will be missed but always remains in our hearts. 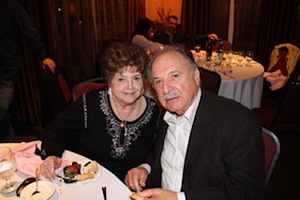