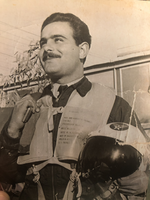 Andrew Lafharis, 88, of Hamilton, entered into God’s eternal rest on Thursday, July 9, 2020 at Robert Wood Johnson University Hospital in Hamilton. Born and raised in Amaliada, Greece he served in the Greek Airforce as a master mechanic prior to immigrating to the United States in his early 20’s. He married his beloved wife Voula in 1958 and began his family a few years later. He owned and operated Stewart’s Root Beer on Route 33 in Hamilton for 47 years and was involved in the local community and enjoyed teaching his hard work ethics to others he employed. He instilled work ethics to the younger generation who still remember him to this day. Andrew was a member of the Trenton AHEPA #72 and was a parish member of St. George Greek Orthodox Church in Hamilton where he served for many years on the annual festival committee cooking for the church.
He had a winter home in Naples, Florida for 30 years and attended St. Catherine’s Greek Orthodox Church in Naples where he began and chaired their annual Greek Festival, also cooking for the church there. Andrew was an extremely hard worker all his life. He enjoyed fishing and providing for his family. He was a loving and devoted son, husband, father, grandfather, great grandfather, brother, uncle and friend to many.