To share your memory on the wall of Vincent Vaccaro, sign in using one of the following options:

Print
Vincent J. “Jimmy” Vaccaro Sr. It is with great sadness that the family of Vincent Vaccaro Sr. announces his passing on November 2 of natural causes at age 94. Vincent passed peacefully at his home in Bradenton, Fla.

Born and raised... Read More
Vincent J. “Jimmy” Vaccaro Sr. It is with great sadness that the family of Vincent Vaccaro Sr. announces his passing on November 2 of natural causes at age 94. Vincent passed peacefully at his home in Bradenton, Fla.

Donations in Vince’s memory may be made to the Gary Sinise Foundation, PO Box 368, Woodland Hills, CA 91365 (garysinesefoundation.org/donate).
Read Less

We encourage you to share your most beloved memories of Vincent here, so that the family and other loved ones can always see it. You can upload cherished photographs, or share your favorite stories, and can even comment on those shared by others.

Posted Nov 07, 2020 at 10:36pm
Anthony, Kathy, Nick; Jimmy, Tresse and Olivia, along with George, Matthew and Cassandra. I am so sorry our wonderful Uncle Jimmy has passed on. He has had a wonderful life full of loving memories of our families being together. He is now at rest with Aunt Ruth and Joanne. I pray for peace for all of you. My thoughts and prayers to you all. Love MaryAnn and Brian
Comment Share
Share via: 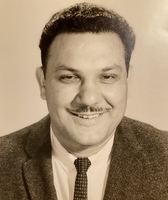