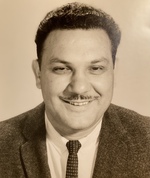 Vincent J. “Jimmy” Vaccaro Sr. It is with great sadness that the family of Vincent Vaccaro Sr. announces his passing on November 2 of natural causes at age 94. Vincent passed peacefully at his home in Bradenton, Fla.

Donations in Vince’s memory may be made to the Gary Sinise Foundation, PO Box 368, Woodland Hills, CA 91365 (garysinesefoundation.org/donate).