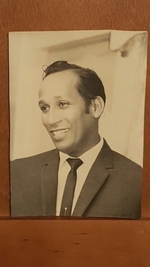 Hubert Denis (“Billy”) Holder, 85, of Ewing, NJ entered his eternal rest on Tuesday, November 17th, 2020, at Samaritan Hospice, Voorhees, NJ. Born and raised in Guyana, South America, he immigrated to the U.S. more than 30 years ago taking up residence in New York before moving to Ewing several years ago. He spent the majority of his career working as a Customs and Immigration Clerk for a shipping firm in his home country before retiring.

Coming from a large family of sports enthusiasts, Billy was an avid cyclist who won many competitions. He also played volleyball at a competitive level. He enjoyed watching soccer and tennis and spending time with family and friends.