To share your memory on the wall of Herbert Allen, sign in using one of the following options:

Herb was a proud member of the United States Marine Corps from 1948-1952, and was honorably discharged with the rank of Sergeant. During this time, he served in Korea, and participated in the assault and seizure of Incheon, the capture and securing of Seoul, and the Wonsan-Hungnam-Chosin campaign. Thereafter, he was a member of the Navy League of the United States. Herb spent his career in the insurance field, ultimately as Regional Claims Manager of the Republic Western Insurance Company, before retiring in 1998.

Herb was a member of St. George Greek Orthodox Church. He was very involved with the Order of AHEPA, the American-Hellenic Educational Progressive Association. He was a Life Member of Trenton Chapter #72 of the AHEPA, a member of AHEPA’s New Horizons party, and served twice as Governor of AHEPA District #5. He enjoyed sports, and was an avid New York Yankees and Philadelphia Eagles fan. He led the Trenton YMCA Church Softball League and coached the league’s St. George AHEPA team. He also enjoyed salt water surf fishing and bowling.

Greek Orthodox funeral services will be held Wednesday, April 21, 2021 at 12:00 PM at the St. George Greek Orthodox Church, 1200 Klockner Road, Hamilton, NJ. Burial will follow in Greenwood Cemetery, 1800 Hamilton Avenue, Hamilton, NJ. Family and friends may gather to pay their respects on Tuesday, April 20, 2021 from 6:00-8:00 PM. Trisaghion services will be held at 7:00 PM with Fr. James Pavlow officiating. Another calling hour will be held Wednesday morning from 10:00 AM to 11:00 AM at the Hamilton Brenna-Cellini Funeral Home, 2365 Whitehorse-Mercerville Road, Hamilton, NJ 08619. In lieu of flowers, memorial contributions may be made in Herbert's memory to the St. George Greek Orthodox Church, 1200 Klockner Rd., Hamilton, NJ 08619 or to the charity of the donor's choice. Please visit Herbert’s tribute page at www.brennacellinifuneralhomes.com
Read Less

The insignias listed here may be subject to copyright and/or trademarked. Those copyrights and trademarks are owned by the respective organizations.

We encourage you to share your most beloved memories of Herbert here, so that the family and other loved ones can always see it. You can upload cherished photographs, or share your favorite stories, and can even comment on those shared by others.

Plant a Tree in Memory of Herbert
Plant a tree 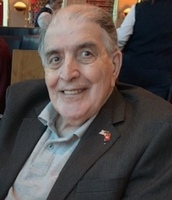